Do probiotics actually do anything? – 60 Minutes – CBS News 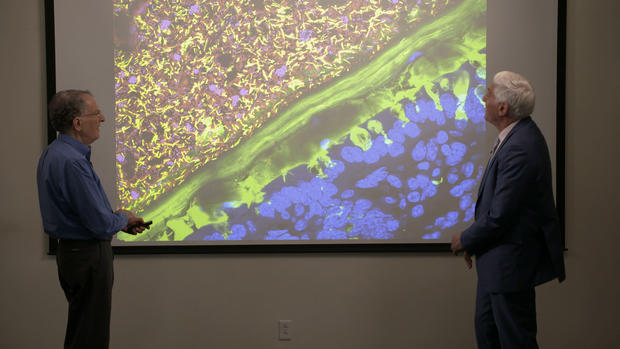 Probiotics, manufactured mixtures of “good bacteria” that help digest food, have become a growing multibillion-dollar industry. But do they work?

13 Minute newscast and Full story at Source: >Do probiotics actually do anything? – 60 Minutes – CBS News

“There is an invisible universe hidden inside your body, it’s called the gut microbiome — a vast array of trillions of intestinal bacteria, hundreds of different species. They help digest your food in exchange for a warm, safe place to live. And we are only now starting to discover the gut microbiome plays a much larger role in our lives than we ever imagined.

“Some of those bacteria found inside us are replicated in commercially manufactured mixtures called “probiotics.” You see them on grocery and pharmacy shelves, and they’re recommended by your friends and often, by doctors like me.

“But do probiotics actually do anything?  To find out, first you need to know about the gut microbiome. (Continue at video and source link above)

“Right now, the microbiome is an area of hot research. Doctors are already treating illness by manipulating gut bacteria. A potentially life-threatening infection of the colon called C. Diff. has been successfully treated by moving bacteria from the gut of a healthy person to the gut of somebody who’s sick.

“And millions of people are trying to improve their microbiomes themselves using probiotics, so-called “good bacteria.” But here’s the problem: there’s a lot of conflict among scientists about whether probiotics provide any benefit at all.

“Dr. Hibberd has reviewed hundreds of studies in the medical literature about probiotics. She has also done her own studies and told us there’s not enough high quality research to recommend off-the-shelf probiotics for the medical problems for which they’re commonly used.

Dr. Patricia Hibberd: The whole idea that maybe throwing in good bacteria that we would take by mouth that hopefully would land in the right places in the GI tract and work with the immune system. We just don’t know how to do any of that.

“Restoring that balance of bacteria in the gut microbiome is just one goal touted by makers of probiotics, a $50 billion global industry sold to us in capsules, popsicles, cereal, tea and some yogurt. And we’re told probiotics can even help your dog.

“One cause of confusion may be the placebo effect: some people using probiotics may feel better because they expect to feel better. And figuring out what probiotics do inside the gut is complicated. One reason is that each person’s microbiome is unique, so the same probiotic may have different effects on different people

“The researchers collected thousands of samples from a small group of adult volunteers who were given probiotics. Eran Segal: We’ve actually looked across the entire gastrointestinal tract at places where nobody has looked before. The volunteers all underwent multiple endoscopies and colonoscopies. ..so the results were actually very striking so what we’re seeing is that half the people take the probiotics and the probiotics, as they go in, they just go out and they don’t populate the gut.

“The researchers also studied a treatment commonly recommended by doctors, giving probiotics to help restore the balance of gut bacteria wiped out by antibiotics. Eran Segal: We found that the probiotics actually delayed the restoration of the bacteria of those individuals to what they had before as compared to individuals who took antibiotics and then did nothing.

“Despite disagreement about how or whether today’s probiotics work, every scientist we spoke with was hopeful about the possibility of improving health by manipulating the microbiome. Last year, Dr. Gordon’s team reported that a special supplemental mixture of nutrients containing chickpeas, soy, bananas and peanuts can repair the damaged microbiome of malnourished infants.

How to boost your immune system – Harvard Health

“Helpful ways to strengthen your immune system and fight off disease

“On the whole, your immune system does a remarkable job of defending you against disease-causing microorganisms. But sometimes it fails: A germ invades successfully and makes you sick. Is it possible to intervene in this process and boost your immune system?

“What if you improve your diet? Take certain vitamins or herbal preparations? Make other lifestyle changes in the hope of producing a near-perfect immune response? What can you do to boost your immune system?

“There is still much that researchers don’t know about the intricacies and interconnectedness of the immune response. For now, there are no scientifically proven direct links between lifestyle and enhanced immune function.

In the meantime, general healthy-living strategies are a good way to start giving your immune system the upper hand.”

Continue reading at Source: >How to boost your immune system – Harvard Health