Steffanie Strathdee uses the internet to save her husband and start a groundbreaking treatment for superbugs. 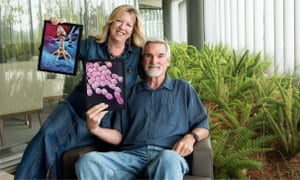 Amazing story how a woman who snatched her husband from the jaws of death by using the internet “correctly”, starting a groundbreaking field of development to attack the superbug crises.

“In 2015, the scientist’s husband was almost killed by an antibiotic-resistant superbug, until she found a cure that is now saving others, Steffanie Strathdee and her husband, Thomas Patterson. His picture shows the superbug that nearly killed him; hers the phage that saved his life. Photograph: Courtesy of Steffanie Strathdee / UC San Diego

“Health Infectious disease epidemiologist Steffanie Strathdee’s husband survived a deadly antibiotic-resistant bacterial infection thanks to her suggestion of using an unconventional cure popular in the former Soviet Union: fighting the bug with a virus.

“Now the global health expert at the University of California, San Diego, she has, along with her husband, Tom Patterson, who is also a scientist at the institution, written an account of their nine month ordeal – The Perfect Predator: A Scientists’s Race to Save Her Husband from a Deadly Superbug.

“We were running out of options to save Tom, whose infection had spread throughout his body, so I started exploring unconventional cures. I found a paper that mentioned phage therapy. Although I’d learned of phages in college, this was the first I had heard of using them as a treatment. My colleague Chip Schooley, chief of infectious diseases at the UCSD school of medicine, agreed it was an interesting idea and said if I could find phages that matched Tom’s bacterial infection he would contact the Food and Drug Administration and get approval to use them for compassionate use. I knew what that meant: officially, Tom was dying.

“I began cold-emailing phage researchers asking for help. A phage researcher at Texas A&M University turned his lab into a kind of command centre, looking for phages active against Tom’s specific infection in his centre’s phage library and in sewage and barnyard waste.